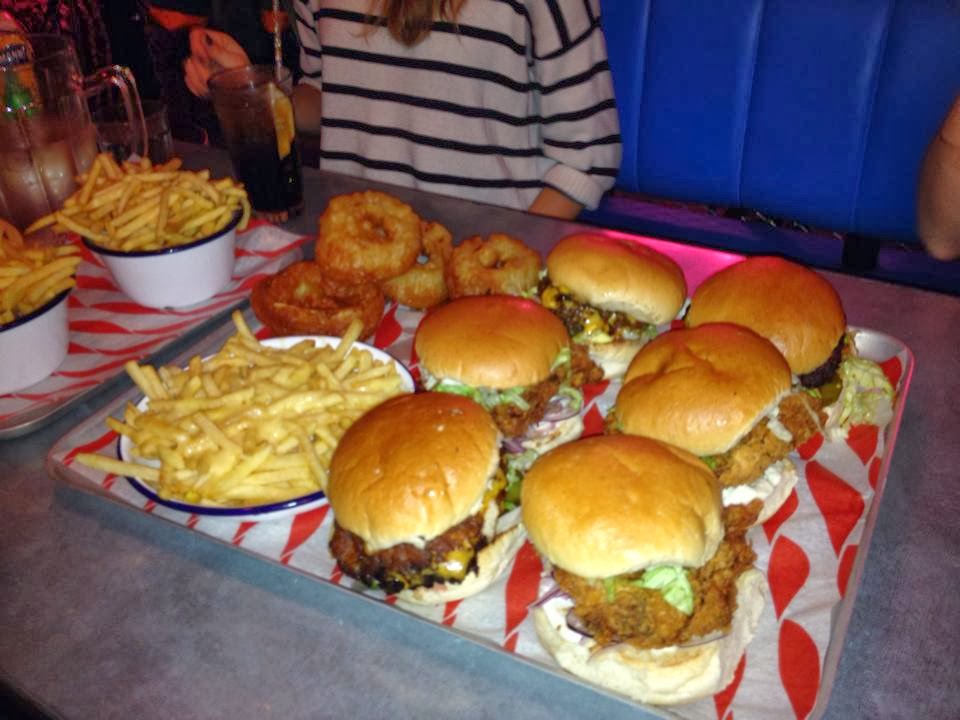 Having heard so much about the success of Meat Liquor in London, I was really pleased to hear they now have a restaurant in Brighton and couldn’t wait to go on a night out there with colleagues.

I knew from social media that it was going to be very dark, loud, hip and have a clubby feel to it, but actually when we arrived on the Thursday night it wasn’t massively packed – none of the queues I was expecting, nor was it that dark or too noisy to talk. Perhaps they crank up the music and dim the lights more at the weekend? There were some sectioned off booths and the décor was a cool mix of edgy industrial – think metal chains and wire screens plus some mean and moody pictures and neon lights.

So, food… I knew straight away I wanted to try the Dead Hippie burger that I had heard good things about. Two beef burgers with melted cheese, pickles, onion, shredded lettuce and Dead Hippie sauce (which was kind of a mustardy mayo??) in a soft bun. It wasn’t enormous, just right. They give you kitchen roll as they do not have plates – everything just arrives on a tray but apart from one greasy bit of spillage on my knee, it wasn’t a problem. Made it even more informal and quirky – not great if you are on a date though!

I wanted to try out all of the sides but not knowing how big the portions would be we shared cheese fries, normal fries and onion rings. (I will have to return to try the fried pickles and buffalo wings!) The bowl of fries are probably just enough for 2 to share. There wasn’t much cheese on the portion and to be honest the ones with no cheese were crisper so preferred those. The onion rings were massive and came with disappointingly thick, oily batter and they went cold quickly which made them taste worse. Shame.

I also tried a little bite of my colleague’s Dirty Chicken Burger as that would have been my other choice on the menu. The chicken breast was whole and came crisply battered with mayo, red onion and lettuce. Think I liked my beef a smidge more so no food envy!

In terms of drinks, the only way to go is cocktails! The Meatjito was made with perfect precision (mojitos can be awful in some places) but the winner was the House Grog – a mix of rums with a tropical kind of juice – pineapple, lime and mango maybe? It is so strong they limit 2 per person. It arrived in a tankard that Captain Morgan himself would have said “Arrrr” to!

The “burgerettes” were young and cheeky, which was great and service was overall brilliant. They tweeted about our table when we got boisterous and started drunkenly dancing at the end of the night – claiming they had CCTV footage of us that they’d put online! I guess we could have been annoying, but if we were, the staff took it well. And to be honest if they serve Grog, they should expect people to leave there drunk!

Great place to have a party and I will return!